Pessimism about China has become pervasive in recent months, with fear of a “China meltdown” sending shock waves through stock markets worldwide since the beginning of the year. But with the right mix of reforms – including political reforms – China can continue its march toward high-income status.

LONDON – Pessimism about China has become pervasive in recent months, with fear of a “China meltdown” sending shock waves through stock markets worldwide since the beginning of the year. And practically everyone, it seems, is going short on the country.

There is certainly plenty of reason for concern. GDP growth has slowed sharply; corporate-debt ratios are unprecedentedly high; the currency is sliding; equity markets are exceptionally volatile; and capital is flowing out of the country at an alarming pace. The question is why this is happening, and whether China’s authorities can fix it, before it is too late.

The popular – and official – view is that China is undergoing a transition to a “new normal” of slower GDP growth, underpinned by domestic consumption, rather than exports. And, as usual, a handful of economic studies have been found to justify the concept. But this interpretation, while convenient, can provide only false comfort.

China’s problem is not that it is “in transition.” It is that the state sector is choking the private sector. Cheap land, cheap capital, and preferential treatment for state-owned enterprises weakens the competitiveness of private firms, which face high borrowing costs and often must rely on family and friends for financing. As a result, many private firms have turned away from their core business to speculate in the equities and property markets.

Chinese households are also squeezed. In just 15 years, household income has fallen from 70% of GDP to 60%. Unless Chinese households are able to reap their fair share of the benefits of economic growth, it is difficult to imagine how a consumption boom is supposed to happen. Clearly, China must take bold steps to unleash the dynamism of the private sector and boost household demand.

China has proved its capacity to implement radical reforms that eliminate major distortions, thereby boosting growth and absorbing excess debt. In the late 1980s, falling GDP growth (the annual per capita rate reached a low of 2% in 1989) and a rising volume of non-performing loans (NPLs) fueled expectations of an economic implosion.

It never came. Instead, the Chinese government launched a raft of radical reforms, including large-scale privatization of industry and elimination of price controls and protectionist policies and regulations. As the state’s share of non-agricultural employment fell – from 30% in the mid-1990s to 13% by 2007 – private-sector productivity rose at an average annual rate of 3.7% from 1998 to 2007. State-sector productivity grew even faster, at 5.5% per year. This productivity growth contributed about one-third of China’s total GDP growth – which accelerated to double-digit rates – over this period. China’s entry into the World Trade Organization in 2001 – another bold step – was a major factor in this success. 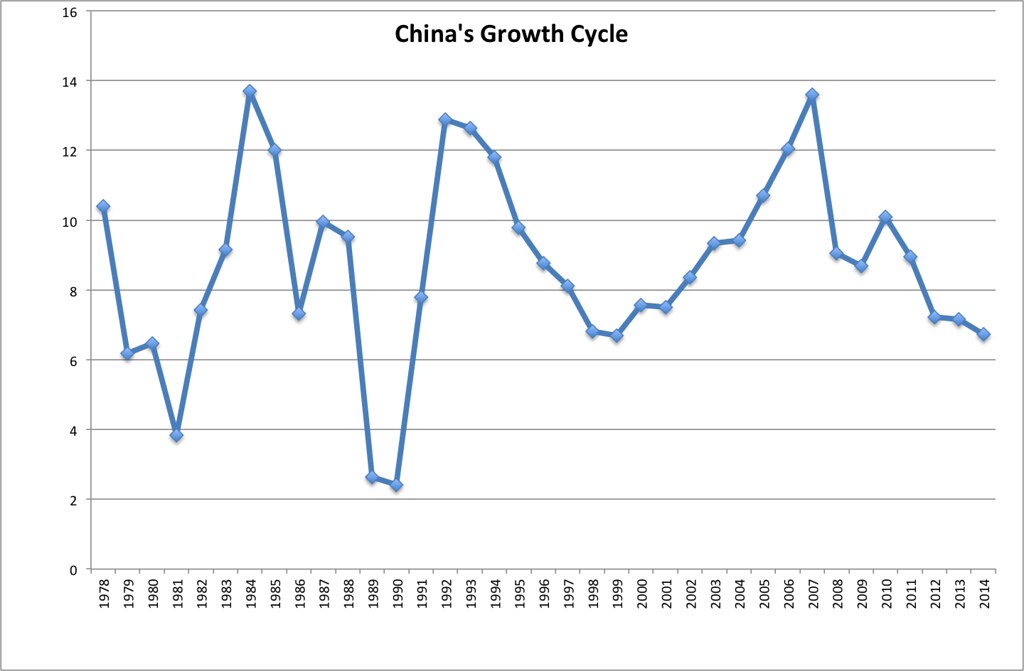 This time around, however, the task facing China’s government is complicated by political and social constraints. The economic reforms China needs now presuppose political reform; but those reforms are hampered by fears of the social repercussions. If China is to avoid economic decline, it will have to overhaul its governance system – and the philosophy that underpins it – without triggering excessive social instability.

The good news is that China has a promising track record on this front. After all, it was a fundamental ideological shift that enabled China’s 35-year-long economic boom. That shift emphasized economic development above all else, with the champions of growth being protected, promoted, and, if necessary, pardoned.

A similar ideological shift is needed today, only this time the focus must be on institutional development. Sustainable long-term growth – based on efficiency improvements, productivity gains, and innovation – is possible only with an effective institutional framework, and that requires fundamental changes to the political and regulatory systems. Only by overcoming vested interests and building a more efficient bureaucracy, bound firmly by the rule of law, can the reforms China needs be pushed through.

Complicating matters further are mounting social conflicts, such as between urban and rural populations, among industries, and between the private and state sectors. The potential for mass protests and civil unrest is now hampering the government’s determination to create change. But with a concerted effort to create a level playing field that gives more people a bigger piece of the economic pie, not to mention more transparent governance and a stronger social safety net, China’s government could reinforce its legitimacy and credibility. That, in turn, would strengthen the authorities’ capacity to ensure stability.

China’s experience in the 1990s suggests that the country can bounce back from its current struggles. With major reforms only half-complete, there are significant opportunities for stable growth based on efficiency and productivity gains, rather than merely on consumption. Once key distortions are eliminated and resources – including labor, capital, and talent – are being allocated more efficiently, China will be able to continue its march toward high-income status.

China’s government may struggle at first; after all, performing surgery on oneself is difficult to initiate and even more difficult to get right. But if economic conditions worsen, as seems plausible, action will become unavoidable. Good times may breed crises in the West; in China, it is crises that bring better times.